The highly anticipated Pan American Cup has come and gone. It completely lived up to the hype as Mark and Pat both scored over 7000 points and won some decent money on some huge cheques. 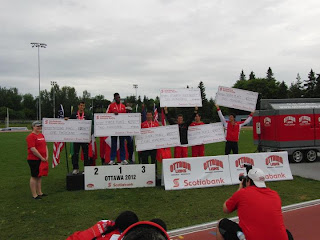 Mark went into this weekend with the goal of making coach James nauseated as many times as possible. I think he succeeded in this goal by faulting his first two jumps in long jump, his first two throws in discus, and his first two attempts at his opening height in pole vault; leaving success in all three to the third and final attempt. Long jump was a HUGE success with a 17cm PB (Personal Best) of 7.18m. He also had strong races in all the running events getting very close to his PB in all 3 sprints and PBing  in the 1500m where he ran a ballsy race where he lead and fought the wind the whole way.
Pat also had strong running races with a PB in the 100m and a near PB in the hurdles. His success in the running had one exception: the 400m which I didn't have the pleasure of seeing. I am told Pat took it out like a champion leading the pack to 200m at PB 200m pace. At this point, considering competitors seeded more than 2 seconds faster than him hadn't past him, Pat knew he was in trouble. He grinded through the rest of the race and wasn't thrilled with the time but is now stronger for having run it. Fortunately he did not die the same way in the 1500m and he finished strong tying his PB. Pat was also happy with a very strong shot put of 14.78m. 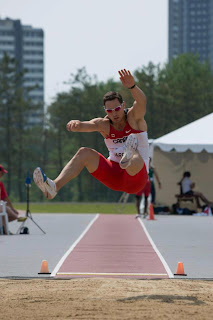 With their combined scores Canada won the team title and won a trophy. Like a boss! 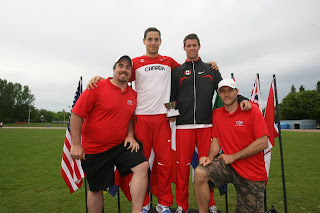 As for myself, I competed in the Ontario open category. This was my first decathlon of the year and was a decent opener. No PB's but I got a nice little video of my long jump.

We finished off with a fun night of team bonding. Next focus: National Championships! Until next time, later days!