Where to begin, where to begin...This was by far the biggest meet of the year for every athlete in Canada thus far. Athletes congregated in Calgary this past week for 4 days of gruelling competition, hoping to punch their tickets to the 2012 Olympic Games in London. Lets just get into it then shall we! Chen and I met the new WR holder on Tuesday while we performed our competition warm up. I (Pat) initiated the hand shake with "Man, I gotta shake your hand, I just love you!" He wished us luck, talked to us for a bit (no big deal) and I have yet to wash that hand after soaking up some of his points from his 9039pt performance.

Reid entered these Trials knowing he would be competing in his final Decathlon ever. He has been fighting hamstring injuries and wanted to take the days event by event. Check this awseome story though. Reid opened his long jump with a SB attempt, and says "well im not jumping like an idiot so im starting a clap!" and then the event music they were playing came on and Reid says "man I wish that played when I jumped!!" *all sad and frowny. Next jump, starts the clap and lone behold what comes on?

(skip to 1minute in for the magic) and then Reid takes off and jumped his furthest distance in over 2 years of 6.86m! Reid held it together for his Dec and scored 6599.

Chen, feeling good and ripe to perform came out hard and fought for points all day. He seemed less than pleased with his day one performance yet sat in 3rd through 5 events. He placed 3rd in a fast heat of 100's and 2nd in the 400m. With the late start on day two, the three of us took to the pool for some aquarobic warmup fun time. Hurdles proved a struggle running into a 2.4 headwind, not ideal for a rhythmic event. He threw himself to a SB disc and the ground at the same time, literally fell on his bum in the circle, class act. His vault work this year paid off again with a consistent 3.80m. Chenery then gutted out a 4:48 1500m to finish up with 7001points and a 4th place performance. This marks his 3rd time over 7000 this year and qualfied him for the Woerden invitational in Holland and PanAms next year. Two teams in one year.

I on the other hand, went about scoring 7000 points in a quite different way, deciding to come out with a below average day one score which placed me in 7th place after 5 events. I ran a pb 100m (11.55) and my second faster 400 ever to keep me within striking distance for day 2. Feeling good the next afternoon  I ran a pb hurdles race by 0.01 seconds into what felt like a hurricane head wind. I kept rolling on the steam from that race all day with a pb vault by 10cm of 4.30m. By the time the 1500m came around I had clawed my way from 7th back into a medal position. I had to hold Chenery off for roughly 30 seconds. I now have my second national medal and a 2 point better decathlon pb of 7088, woop! This marks my 3rd time over 7000 this year also. The program is working James! I will be joining Chen in Holland come August as well, back to the motherland! Can not wait!!!!! 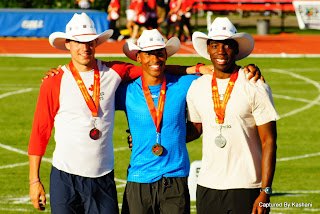 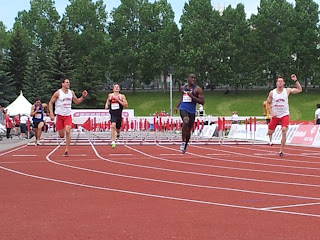 (Dipping for the line, Chen far right, me far left.)

The Decathlon was over, but I still had to throw the next morning in the open discus. It went ok, and I came 9th with 47.19m. After the competing it was time for us to call it a week, get some sleep and read bedtime stories to one another and be good little angels. While everyone else partied we played scrabble and solved world hunger.
Reid is back in Ottawa now and Chen and I have gone back to his home in Victoria. I am overly exited to check out the sites and he is overly exited to see his puppies and spend time around the Ocean he misses oh so much. Theres alot of pictures being taken as I have never ventured this far out before, its all so new and pretty to me!
Huge shout outs to new Olympians and good friends going to London later this year. Can not wait to watch you all in those new sexy uniforms being all Olympian like!!! HIGH FIVE!
Check this super sweet article out also about Chen and I from before the trials. Getting some #geegeeslove.
http://geegees.ca/node/374&sid=36&nid=2082
Posted by Arbs at 11:01 AM