February has come to an end, and so has the indoor season.  With the last indoor meet for Pat this past weekend, this years indoor competitions have concluded.  This indoor season was exceptional for Mr. Arbour as to date he has set new pb's in pole vault (which he pb'd again in this weekend with a 4.51m clearance), shot put, tied his high jump pb and had a big pb in the hurdles and overall pent personal best!  He even had a second best effort in the long jump.  Not a bad indoor start I must say.  Big shout out to our PV coach Jeff who after this indoor season had 26 pb's from his athletes.  Insane! 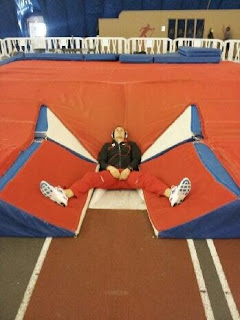 While it was quite a short lived season for myself due to injury (only competing once, and barely at that), I can finally say that I'm virtually back to 100% training!  After months of waiting, I can now enjoy most workouts pain free.  Now that indoors is over and I'm finally healthy and Patrick is riding a pb train, what could make things better?  Knowing that we have only one month until our decathlon opener in Tucson!

We are both incredibly excited for Tucson this year because not only will it hopefully be a great competition with great competitors, but it will most likely be warm and sunny.  None of this cold, white stuff anymore.  This is also our one chance to get the FISU (world university games) standard, that both of us are hunting for. This would give us the opportunity to go to Russia in July and compete in the biggest international meet either of us would have been too.  It is considered the 2nd largest multi-sport games after the Olympics!

So until Tucson we'll be putting in the hours at the track to make sure we give ourselves the best possible chance to get on that team.  Just to keep things visual, here's a little compilation of some of our recent training indoors.  Lookout for our amazing videography.  We even dubbed in some slow mo and music...wild!  A little shaky on the robot running style and not too sure about the transitioning but we'll get it eventually ha ha.