Last weekend Mark and I traveled to the beautiful city of Montreal to contest the largest pentathlon event of the year at the McGill team challenge. Universities from both sides of the country came together to create another great event and charged up atmosphere. Mark has been battling his lower abdominal injury but thought he would give the pent a try, hes a competitor! The pent started at 8:45am with the hurdles. The Ottawa combined events group came to the track ready. Mark went on to run a rather impressive time of 8.39, given the fact his last race would have been when we were in the Netherlands. In my 2nd race of the season I went on to run a new pb of 8.38, shaving .10 off my previous best and opener. Check out the race for yourselves. I am heat one, our other roomate is heat two, and Chen wraps up the sweep in heat three.


We followed hurdles up with some long jump. It was at long jump when Chen would start to feel the nuisance of his ab and after two jumps decided to wait until shot put to gather some more points. I on the other hand jumped my second best jump ever, 6.74m. Thanks to the lovely folks at McGill the entire meet was filmed and this jump is at 1:30min into this stream...
﻿
At this point I had quite the pent going, having won the first of two it was on to shot put. Chen took one throw and with that his indoor season as a GeeGee came to an end. It was an easy decision to make when looking at the bigger picture of making FISU this summer and focusing on the outdoor goals. I did not throw my best here but it was consistent enough to keep the lead and win my third event of the day with 14.41m. Our fourth event was high jump. This event has come to be quite the thorn in my...However, I finally feel like I am understanding my abilities as an athlete and with that my head space while competing. If I would be disappointed jumping sub 1.80m then the solution is to not make that an option. Simply enter the competition when the bar is higher and go over! That being said I went on to tie my best jump of 1.90 for the third time as an athlete. I will join the 2m club, one day. Chen speaks very highly of it (so punny!!!). I placed 2nd in the high jump and held my lead going into the 5th and final event, dumdumdummmmm the 1000m. Won't lie, that wasnt my shining moment. In typical Arbour fashion I managed to squander a 160point lead to Calgary's Craig Thomas who would nudge me off the gold medal by 17 points. Eventually I will be a force in the 1000/1500m, I almost kept a strait face there. I finished with a nice 108point pb though, 3710. Congrats Craig, see you in Arizona for the real thing in April. Here is a little montage from the weekend's events.
Now that the track talk is done. Let's take a minute to wish Chen a very happy birthday! He turned 25 yesterday and we celebrated with a super bowl gathering. Happy Birthday Mr.Chenery, we love you!!! Look how pretty he is, awwwwww. 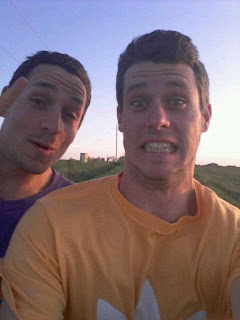