It has been a long while since you have last heard from Chen and I. Since our last post, much has happen. Chen went down to Virginia as we last posted. Things did not go as he had planned as he suffered another set back. Chen was forced to drop out of the decathlon when he sprained his left ankle and was unable to take off and plant from his leg. The set back was more physical then psychological. His focus shifted from qualifying for FISU to getting himself healthy enough to compete at nationals where he will aim for the podium and strive to book his ticket to Europe for Holland's international event and "Les Jeux de le Francophonie" in the south of France.


Chen got himself ready to compete in the open section of the PanAm event, where he would plan on competing with the decathletes for the running and throwing events. I was feeling healthy and ready to represent Canada on my 4th national team. I opened with a pb 100 with a time of 11.51. Here is the video our the timed finals. Chen is in heat one and I am in heat two.
The weather for our event was less than ideal. I would go on to score my second highest point total with 7183 and place 7th in the event. Chen didn't get himself any more injured and had some outstanding performances at the end of the day; highlighted by a 50.22 400m time, an impressive task with the gale force winds the facility endured. Chen also managed a season best shot put throw of 11.94. Here is a little bit of the fun we had warming up gloomy and early on sunday morning. 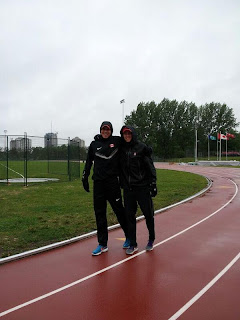 We both enjoyed our experience and are very excited for nationals which is fast approaching. We will be leaving for Moncton on a little road trip in 11 days and competing the 20th-21st. Since the decathlon this past weekend, Chen and I have received some publicity doing interviews for online sports pages and local papers. Here is an article featured in the Citizen post event. http://www.ottawacitizen.com/sports/Battered+weather+decathlon+takes+measure+athletes/8468157/story.html 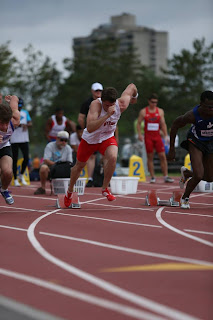 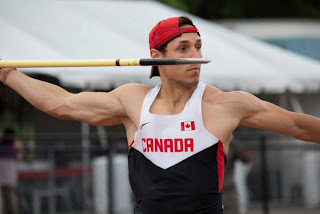 Chen and I have found ourselves experiencing different emotions in regards to the Decathlon's we have competed in this short season already. The highs are addictive and the lows bring you into moments of perplexed wonder on how you could have performed in such a manner. Learning to keep our emotions in check while keeping our intensity at an all time high for 10 events will allow us to achieve levels of success that we train so hard to attain. The question remains, how to best stay excited for an event which you are not excited to compete in. For me that is high jump, the 400, and 1500. For Chen it is shot put and the jumps due to his injuries. After speaking with coaches, it would seem the best way to do this is welcome the opportunity to compete and the opportunity and chance to set a new standard for yourself. Confidence, relaxed, and embrace are a few of the words I heard a lot of this weekend. Now it is up to me to figure out how to best put these words into action and find a way to make them work for me. Cues are big mental notes, and Chen will need to find ones which work for him as well.
Chen and I will tackle Moncton as we head off for nationals in the next 10 days on a nice little road trip. We will be looking to get two Ottawa Lion athletes on the same podium.
Anyways, here is some long jump from the weekend.