It seems the Olympics have come and gone.  There have been so many ups and downs for not just the athletes, but what seemed to be an entire nation. From the womens soccer to the mens 4x100. World records fell, and Olympic records were eclipsed.  The average age for the Canadian athletics team was 24.5 years, a young team that still managed to "inspire a generation".  Hats off to all athletes and friends.  Derek Drouin won our only medal with his 2.29m high jump, placing him 3rd.  But what would this be if we didn't single out fellow decathlete Damian Warner on his 2nd best all time Canadian performance with 6 individual personal bests and a massive 300+ point overall best.  Mark and I feel as motivated as ever to continue training and get to the next level for Rio 2016.

As the Olympics captivated and consumed all of our free time we managed to squeeze in our own training. As we prepare to leave to Holland in 8 days our workouts have taken on a higher intensity with lower volume overall. We are in our final week of workouts, lots of technical and short sprints with a one or two humdred meter that should get a bit of a lactic burn in there....yay!

Tonight the Olympics came to a close, very bitter sweet. As the torch is passed on so is the dream. The games may be done but the spirit is very much alive and well. Congradulations again to all the athletes in all sports for Canada. Congrats also to the new world records set by the Jamaican mens 4x100, American womens 4x100, Rudisha of Kenya in the 800m, and finally Elena Lashmanova of Russia in the womens 20km race walk. Mark and I sat here and watched you all compete whether that be live on tv, or streaming on our computers.  At times we had 3 sources going. 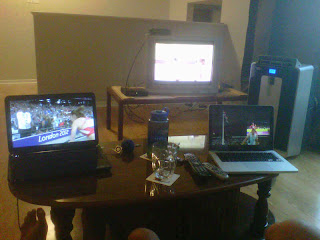 This is some serious dedication.  Not to mention every time we saw someone we knew we had to shout out their name, as if the other didnt already know who it was. It's just part of the Olympic spirit if you ask me.

Go Canada. You have represented us well.