Mark had a busy week at the CIS Championships competing in the pentathlon, long jump and hurdles. Back in Ottawa we watched and cheered for Mark while trying to comprehend how they found such knowledgable and sophisticated commentators (*mild sarcasm*). In the pentathlon he lead through the first 4 events. Heading into the final event of the day, the 1000m, Mark had to run the fastest race of his life by 10 seconds to hold off Saskatchewan's Keegan Sharp. Leaving it all on the track Mark came out with a new 1000m personal best of 2:48.34 to earn a silver medal and a respectable 3811 points. Mark then had a night to recover for hurdle qualifications and long jump finals. Getting in some good practice for the outdoor decathlon, Mark came back strong on day 2 with hurdles and made the finals where he would score more team points placing 7th. He then turned around with a solid jump of 6.82 which would place him 6th. What a great team player! Mark will now enjoy a short lived recovery week before joining Reid and I with outdoor transition training.
-Check out Chen lining up for the 1000m, scary feeling right there. 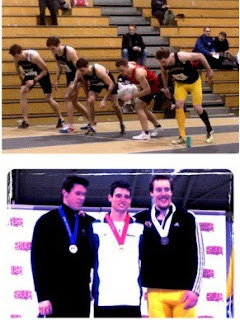 Back in Ottawa Reid suffered a minor set back in his training when he miraculously landed straight on his head this wednesday during a pole vault session. Feeling substantial pain in his rib Reid had to go to the hospital and make sure everything was ok. Nothing was broken, but the pulled intercostal muscles are greatly affecting his mobility as even sitting up is an amusing challenge for him. We now know what Reid will look like when he is an 80 year old trying to race us down the hallway of the retirement home. This injury has lit a fire under Reid, motivating him to come back and train harder than ever. He is optimistic about things and already itching to make a return.

I have had a normal week of training with the coaches gone. I trained alone for the most part with Reid out with injury and the University team competing and taking their week off. Most of my week was spent following athletics with indoor championships in NCAA, CIS and IAAF. I may add, we have two new world records in the women's Pent and mens Heptathlon. Congrats to Natalia Dobrynska of Ukraine and Ashton Eaton from Oregon. I would also like to congratulate our University of Ottawa team on their most successful CIS meet ever with golds going to Sekou Kaba (60mh), Jen Perrault (1000m) and last but not least the men's 4x400 and 4x200 which was a new CIS record! Silver's to Chen (pent), Mikey Robertson (300m). Bronze goes to Jen Perrault in the 600m also. This wraps up our indoor season for the world of athletics and onto bigger things outdoors.
Stay tuned, until next time! 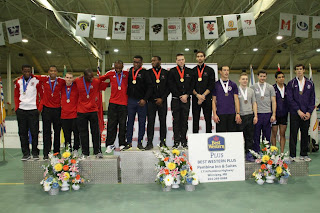