Dec's and Flights and Cliffs oh my!

Well after a months hiatus and our last decathlon completed we are back from Europe.  Thrown back into "real" life and the start of school for myself and work for Pat.  We are also currently enjoying the last couple weeks of our off-season and time off.

We arrived in the Netherlands 4 days before the start of competition and spent those days with final training preparations and being complete tourists in the town.  Renting bikes and venturing around the town (Woerden), leaving no statue without a picture.  Here's an example of our fun with our great crew including: Jen, Rachael and Craig. 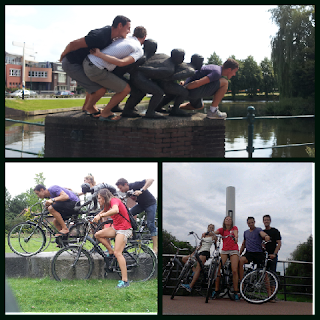 We had to re-create the figure skating picture as our coach (James) told us it was a tradition.  Here is his teams attempt. 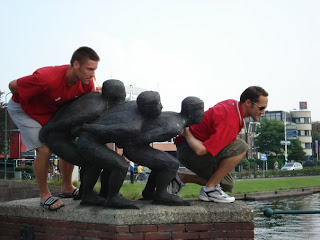 The actual decathlon was awesome.  Littered with talent and class acts, it's hard not to enjoy yourself.  Day one was a bit more wet than we would have liked and I think it showed in our performances, as all three of us had less than solid starts.  After day one, sitting back of our day one point pb's we knew we needed to step it up and compete.  This showed as our hurdles were near pb's for both Pat and I.  Although there was still a little disappointment as we had terrible starts, getting beaten handily to the first hurdle.  Pat went on to win the discus throw, throwing 45.xxm.  The next event proved to be the highlight for both Pat and I, the pole vault.  In this event I went on to pb and clear 4m for the first time in competition, and a new pb of 4.43m for Pat.  The dec finished off with solid 1500m as well, with both Pat and I getting pb's again.  Pat narrowly missing out (and I mean narrowly) on cracking that sub 5 minute barrier running 5:00.06.  Ouch!  I had a 2.5 second pb running 4:42.xx.  It was a great way to end our last decathlon with Pat finishing 8th with 7057 points, and myself in 9th with 6982 points.  Congrats to Craig on completing his first international meet as well finishing 13th!  All that was left was to round up  the boys for pictures and the closing ceremony, as well as trying to collect some very memorable gear.  Just like in international soccer matches it is common for athletes to exchange uniforms after competing. 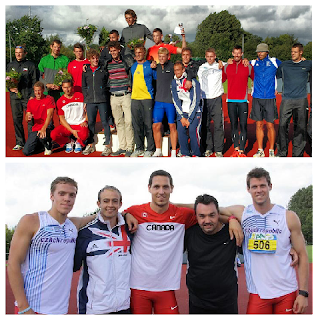 Here is a shot of the boys (top), and Team Canada sporting a couple newly found singlets along side Sam our British competitor and photographer Bjorn.  (You can't see it on any of us but all three of the Canadians got our Czech singlets signed by previous WR holder in the Decathlon Tomáš Dvořák who was there coaching).  Special thanks to coaches Ingrid and Les for all their help and support over the week we were together.  You exceeded any expectations we already had, and we cannot thank you enough!

After the meet the local club (AV Clytoneus) put on a feast and get together right at the track to share some laughs and say goodbye to the other athletes.  Great hosts, you can always count on them to show you a good time!

Then we were off to Amsterdam with Craig for a couple days before our flights to Ireland to visit my sister. We were even lucky enough to meet up with a few of my old training partners in Amsterdam (Maggie, Claire and Casey), who were in Belgium competing in their final meets.  Great times!  Then we said our goodbyes once again and headed off to the airport with Craig where he was flying back to Calgary and we were off to Ireland..or so we thought!  Turns out leaving plane tickets to the last minute is not a good idea financially or timing wise; although it did give us time to stumble across one of Hollands greatest cities (in our opinion), Zandvoort.  This place was insanely beautiful, it had some of the best beach restaurants around and was only a short train ride from Schipol airport.  After our short-lived stay in Zandvoort, Pat and I trained back to Schipol where we caught our early morning flight to Cork, Ireland.

Once we arrived in Cork we stayed with my sister who lives in a small town about an hour outside of Cork.  We were only at her house for nights before we went off on a 5 day tour of Ireland and Northern Ireland.  Venturing up to Dublin, Belfast, Portrush, and finally Galway before heading back to the farm.  Along the way we stopped at every scenic or touristy spot as well as checking out some local hotspots.  In Dublin we obviously had to check out the Guinness Storehouse and factory, then just spent the next couple days cruising the Irish pub scene and enjoying the whack of Gaelic Football fans in town for the big match.  After Dublin we went for a quick visit to Belfast then continued on up to Portrush in Northern Ireland.  Stopping along the way at the Carrick-a-Rede, a 100ft high rope bridge over the ocean.  This was absolutely stunning and a little nerve racking as the Irish don't believe in fences or rails preventing you from climbing to the edge of the cliffs.  Not a good idea when Patrick is with you (Sorry Audrey!). 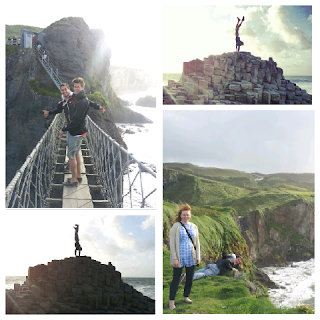 The next place we visited was the Giant's Causeway.  This is an area of weird looking rocks that were said to be made by a giant connecting steps from Ireland to Scotland.  We just thought they looked like a cool place to run around and do handstands (you tell us which is better, I'm top right and Pat is bottom left).  On our way leaving from Giant's Causeway we stumbled upon this awesome castle (which are everywhere in Ireland), sitting dangerously on the edge of a cliff.  Needless to say, once we saw it we ran out to check it out.  Too bad it was closed; although that didn't stop us from taking a quick look around.

After Portrush we continued down to Galway, stopping at the Bushmills Irish Whiskey Distillery on the way.  This was a very cool experience and I would have loved to take pics.  Too bad because of the alcohol content in the air we weren't allowed.  Insane!  After a nice early start to our day we road tripped to Galway, which is a cool little port city.  While there we took a ferry ride over to the Aran Islands.  Well just one of the islands, Inis Mor.  Here they had an old barbaric fort situated once again on the edge of a cliff about 100m high.  After Galway we were heading back to my sisters house, but on the way we were going to show Pat the Cliffs of Moher.  These are a small 200m+ set of cliffs with some spectacular views (usually).  Too bad when we got there it looked like this.  Next time I guess. 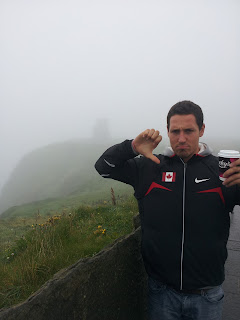 Back in Clogheen (my sisters' town) we hung out and got ready for heading home.  All that was left was one last touristy expedition.  We were on our way to Kiss the Blarney Stone.  If you don't know just google it.  This is one of the coolest castles, with all the things you'd ever think were associated with a medieval castle: caves, secret passages, dungeons, witches and mystical forests.  Once again we were like little kids running around having the best time. 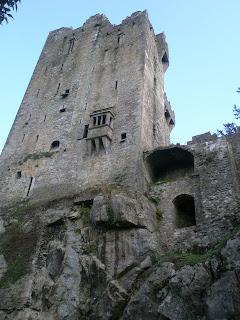 After kissing the Blarney Stone we were back to Clogheen for the last time.  We said our goodbyes once again to my sister and hopped on our flight home.  Making a couple of connections we managed to hit 4 countries on our journey home (pretty cool but took forever!).  Now it's back to reality and back to routine.  The trip was a blast, I'm sad to see it's over.  Again we cannot thank everyone enough for all they did, we would probably be left somewhere in Europe cold and afraid if it were not for your help.  I can't wait for the season to start again and start all new adventures over again.  Until next year!